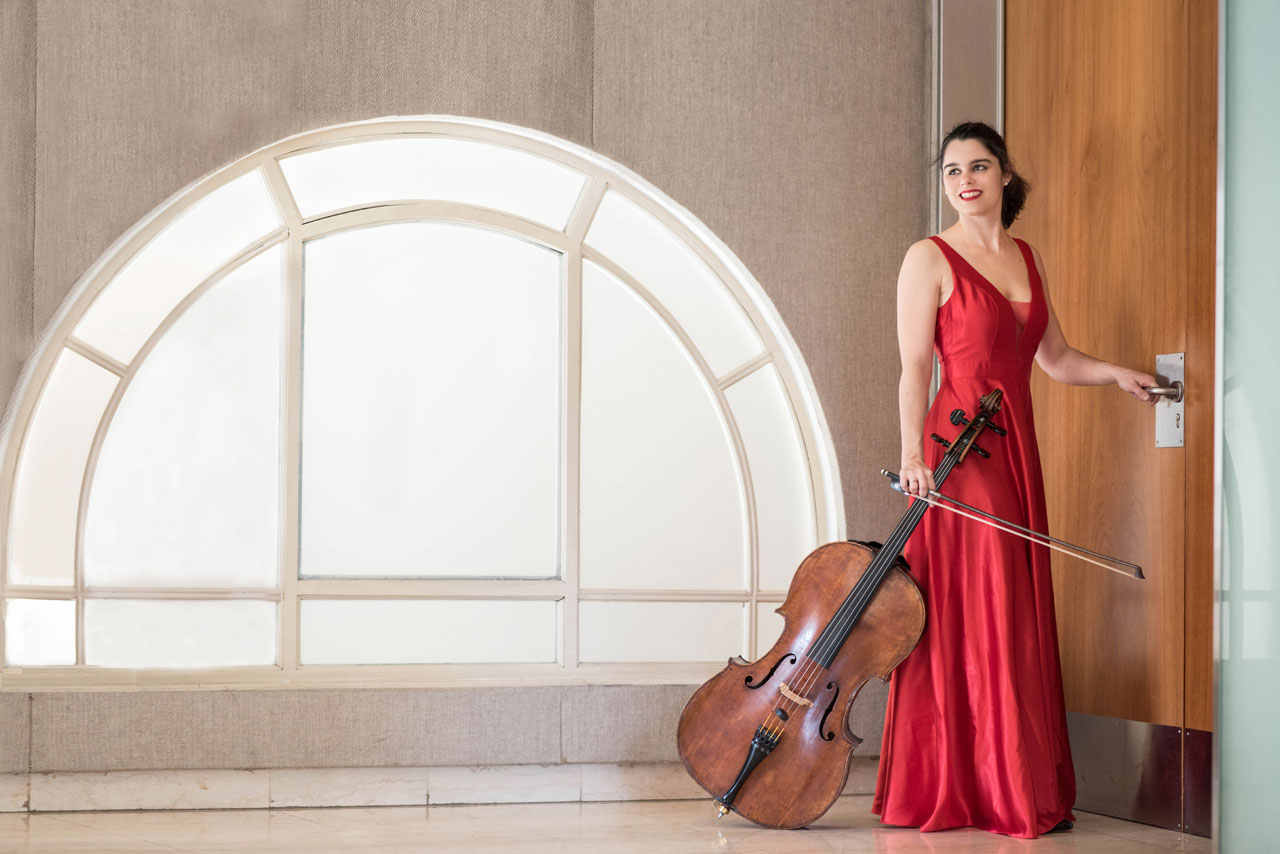 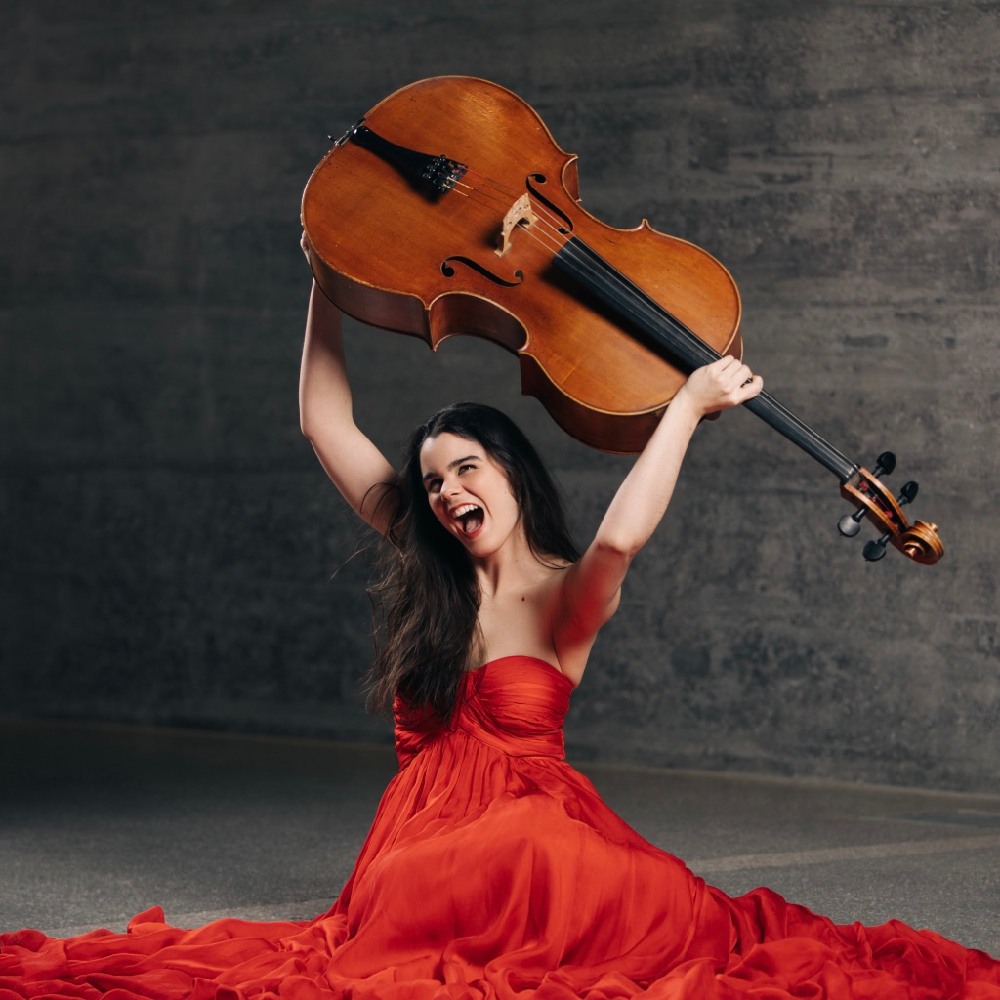 Johann Sebastian Bach can be regarded as the father of music written for solo cello. With his Six Suites of dances for cello, he composed a benchmark work that all cellists measure themselves against sooner or later. This humanist work touches the core of every listener with simplicity, sincerity and elegance.
How did this superlative work inspire composers over the course of time?
How were certain conventions breached in order to arrive at the music of today?

This project discreetly turns the « listener's point of view » on its head, taking us on a journey into acoustic territory where the composers seem to contemplate each other from their own cultural and temporal terrain, despite the entirely original approaches they exhibit individually.
Johann Sebastian Bach's music acts as an anchor point, while interspersed between each movement of his Suites for Solo cello are short pieces by major composers of the 20th and 21st centuries.
This alternation between tradition and modernity firstly takes us on a journey to the essence of the key, helping the listener feel its power and near-physical impact. Whenever we move away from it, a surprise occurs; whenever we return to it, we are reassuringly comforted again. By bringing listeners so close to the fundamental question of key, we give the audience the opportunity to discover more about contemporary music and to move beyond any preconceptions they may hold.
This alternation also offers listeners unusual transitions between the dances of Johann Sebastian Bach's Suites. On occasions, these transitions bring out certain similarities between contemporary music and that of Bach by highlighting aspects of rhythm, melody or harmony that have in fact been directly taken from Bach's music. On other occasions, this alternation naturally bridges the different characters of Bach's dances.

"Estelle Revaz presents a demanding program which she interprets at a very high technical level. The sound is pure perfection, her phrasing is extremely clear and the dynamics are exceptionally refined. Estelle Revaz' performances are particularly unique and reveal that she is a masterful advocate of music, be it ancient or contemporary."
Pizzicato, March 2017


"As mentioned in the program, Estelle Revaz is an internationally renowned cellist. This was confirmed thanks to a particular sovereignty in her performance. She interpreted each movement of Bach's 3rd Suite with a great deal of nuance and relief. The perfect conduct of her phrases, the good sense of her rubati and the huge palette of her dynamics gave a new brilliance to pieces that are, after all, very well known. And with what intensity she took us in a plunge into a totally different musical world!
Modes of musical expression have multiplied today. Bach's Prelude was followed by Zimmermann's dazzling solitude, underlined by surprising changes in playing modes (with use of bow wood, hairs, pizzicati). With Berio, the Allemande was confronted with a slower musical approach, a changing articulation and phrasing. Gubaidulina used the eighth notes of the Courante in a very transparent way. As an extension of the Sarabande, which is the serious piece of the Suite, Estelle Revaz proposed Kurtag's Az-hit, a piece whose elocution is almost pleasant for the instrument. The virtuosity of the artist was found in the last two correspondences. Les Bourrées ended with a work by Lutoslawski based on the Sacher motif, which is suddenly interrupted several times. And following the Gigue, Ligeti's Capriccio, which honors Paganini. Estelle Revaz's interpretation was just as brilliant!
The artist had asked not to applaud between the different pieces. Suddenly, at the end of the evening, the public was able to let its enthusiasm explode with a Standing Ovation. Estelle Revaz proposed an encore Sarabande but since the applause did not want to end, she offered a second encore, a Prelude, which is one of her favorite pieces."
Grafschafter Nachrichten, November 2020 (Live)


"At a packed out 'Steinway Lounge – Hug Musique’ concert, Estelle Revaz projected her name to the top of the list of future greats. Revaz performs movements from Bach’s Suite No.3 with refreshing simplicity, alternating these with short pieces from the 20th century – a juxtaposition which reveals striking parallels."
Neue Zürcher Zeitung, June 2015 (Live)


“On her new album Estelle Revaz demonstrates courage and skill, overcoming the technical pitfalls set by the highest pinnacles of music with comfortable mastery of her art. She shows why she certainly belongs to the great international hopes of her instrument.”


"Estelle Revaz has explored Bach's Cello Suites with a new perspective and has discovered passionate parallels with modern contemporary music. This is one of the best cello concepts of the moment!"
Musik und Theater, January 2018


"During the first 50 minutes, soloist Estelle Revaz performed two of the six Suites for solo cello by Johann Sebastian Bach, her intensity growing with every movement until the grandiose finale just before the interlude. She paid homage to some very demanding pieces with a great deal of spirit, power and skill. With an atmosphere that was deeply moving, and at times even celestial, the second part of the concert was the climax of the program. Revaz easily switched between baroque and modern aesthetics, and the enthusiastic audience gave a standing ovation to a performance of the highest order. A superlative, passionate presentation of Bach and his Friends."
Hohenloher Zeitung, June 2019 (Live)


"Estelle Revaz is brilliant with a sparkling and exciting momentum. Her playing has punch, it emanates voluptuous temperament as well as sensual fantasy."
Klassik Heute, April 2017


“The entire sequence of the pages is played with a logic and flair that gives them an almost choreographic quality, an aspect which is never impaired by the acrobatic virtuosity of a performer with the ability to sprinkle an array of instrumental colors that go hand in hand with a warm, all-encompassing lyricism. The dynamic contrasts, the completeness of expression and the full, velvety, melodic contours of Estelle Revaz’s playing mean that even what are in principle the most austere parts of the recording are conveyed with a wonderful blend of intelligence and sensitivity. Thus she is able to release their full emotional potential and highlight similarities between the music of Bach and a number of important composers of our time.”
Scènes Magazine, September 2017


"Estelle Revaz’s energy and involvement light up her performances – an artist to discover right away!"
RTBF, February 2018


"Estelle Revaz moves with great ease from Baroque aesthetic to contemporary aesthetic and navigates remarkably between tradition and modernity: young artist and real "friend of Bach", already at the summit of her art!"
L'éducation musicale, June 2017