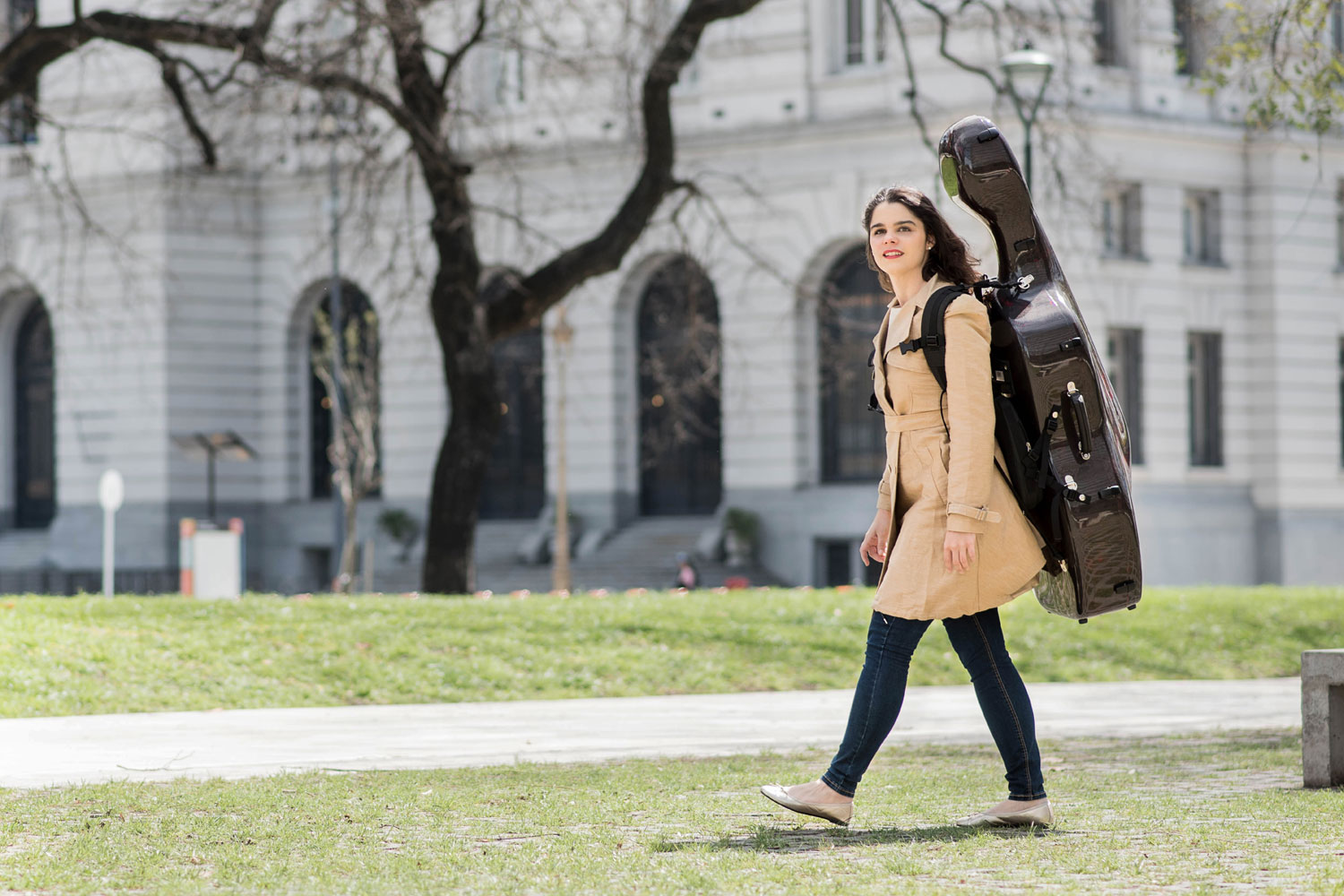 To be able to experience again the joys of an overseas tour was a magnificent privilege. Concerts and masterclasses followed one another at a frantic rhythm during a period of 15 days in extraordinary places. Le Matin Dimanche reported on this fantastic trip.
To discover the story of this adventure : www.matindimanche.ch

A fireworks display for the month of February!

No less than five different concertos are planned with the Geneva Chamber Orchestra in sumptuous venues such as the Victoria Hall in Geneva or the Salle Paderewski in Lausanne. Complete concertos by CPE Bach, world premiere of Ligne d'Est by X. Dayer or the rediscovery of Frank Martin's concerto... A final show that promises to be full of emotions!
To read the article published in the 24 Heures : www.24heures.ch
To watch the television interview on Leman Bleu : www.lemanbleu.ch

2021 has been an incredible year! It began on a television set in front of the President of the Confederation Guy Parmelin. This was followed by months of political commitment to the defense of actresses and cultural actors with, fortunately, some successes, notably through the Covid law. On the artistic level, 2021 also brought many very intense moments, whether it be with the recording of the album Inspiration Populaire or on stage with a revival that was certainly temporary but so intense!

In spite of a very uncertain situation, fortunately a few concerts could be maintained this summer. Emotion was palpable and the magic of the live show could operate to the greatest delight of both public and musicians.
The concerts at the Rencontres Musicales de Champéry were sold out and Beethoven's Triple Concerto alongside Alexandra Conunova and François-Frédéric Guy was highly acclaimed by the press (link below).
The concert with Renaud Capuçon at Variations Musicales de Tannay was the occasion of a beautiful artistic encounter applauded by a captivated audience. www.estellerevaz.com

The Journey to Geneva disc has been recorded!

After long months of uncertainty, we could record the disc Journey to Geneva together with the Geneva Chamber Orchestra and Arie van Beek at the Ansermet Studio in Geneva. This disc features Frank Martin's concertos for cello and orchestra as well as a creation by Xavier Dayer written for Estelle Revaz; It will be released in January 2021 by Solo Musica.

In addition to the concerts in Switzerland and in Europe, different tours are scheduled in China, South America and Canada as well as the recording of the concertos by Frank Martin and Xavier Dayer (a world premiere) with the Geneva Chamber Orchestra. More information on:
www.estellerevaz.com

Estelle Revaz begins her last season residency with the Orchestre de Chambre de Genève. Within the framework of that residency, she will play several concerts and record a new CD! For more information:
www.locg.ch

A tour in South America

Estelle Revaz will travel to South America in October 2019 to perform Suites by Bach, recitals with Anais Crestin (piano) and Dvorák's concerto. She will also hold masterclasses at the Universidad Nacional de las Artes (UNA), at the Conservatorio Superior de Musica (Buenos Aires, Argentina) and at the Orquesta Juvenil del Sodre (Montevideo, Uruguay).
Discover her adventure at the CCK: www.cck.ar

The FUGATO CD just came out!

The FUGATO CD just came out from Solo Musica! It's about German romanticism! It's about tradition, originality and innovation! Beethoven, Brahms and Strauss sonatas with François Killian at the piano. More at: www.fugato.com

Professor at the Kalaidos Academy of Music

Estelle Revaz is very happy to announce her nomination as cello and chamber music Professor at the Kalaidos Academy of Music!! Read more at: www.kalaidos-fh.ch.ch

A tour in South America

Estelle Revaz will travel to South America in September 2018 to perform Suites by Bach and recitals with Anais Crestin (piano), and to hold masterclasses at the Instituto Superior de Arte del Teatro Colón (ISATC), at the Conservatorio Superior de Musica (Buenos Aires, Argentina) and at the Orquesta Juvenil del Sodre (Montevideo, Uruguay).

Estelle Revaz will travel to South Africa in August 2018 to perform the Schumann Concerto with the Johannesburg Philharmonic Orchestra conducted by Daniel Raiskin and to hold masterclasses at the Free State University, Bloemfontein.

The Bach&Friends recital within the Gstaad Menuhin Festival was a big success! Discover an interview with Estelle Revaz:
www.gstaaddigitalfestival.ch

2017-2018 will see Estelle Revaz begin a three-season residency with the Geneva Chamber Orchestra. Within the framework of this residency, she will play several concerts and record a new CD! More at: www.locg.ch

The "Bach&Friends" CD just came out!

The "Bach&Friends" CD just came out from Solo Musica! It's about cello, about music. It's about tradition and modernity! There are sounds, colors, things to be discovered. For more, go to: www.bachandfriends.com

Estelle and the Cello on Swiss Radio!

To listen to the interviews, please click on: www.rts.ch

Thanks for your support! 2016 was a crazy year... but we made it! If you want, you can watch a small movie about 2016... and discover a short excerpt of my next album, here: Bach&Friends. Best wishes for the new year!!!
With Love, Estelle www.2016.ch

Estelle Revaz has signed a long-term recording contract with German label Solo Musica, Munich. Her first recording for the label, to be released in the Spring of 2017, and distributed by Sony Music in Europe and by Naxos worldwide, will feature Cello solo works by J.S. Bach and their reflections in a selected repertoire of contemporary composers.
www.pizzicato.com

The concert with the OSR within the framework of the "Variations Musicales de Tannay" was a big success! Here is the beautiful review:
www.classiquenews.com

The "CANTIQUE" CD just came out!

Meet Estelle again as soloist in the "Schelomo" concerto by E. Bloch as well as in the creation of a work in six parts that has been composed for her by A. Pflüger. With Facundo Agudin and the Orchestre Musique des Lumières.

The "Forum of the 100" shows off those who represent the future of Switzerland. Estelle Revaz is now a laureate of this Forum and has been honored by a beautiful article in the former magazine, and by a fascinating photo with D. Rossellat, Director of the Paléo Festival-Nyon, in the latter.
The Hebdo article and the Illustré are to be found at: www.illustré.com

During 2014, this prestigious foundation has rewarded Estelle Revaz for her talent and her international career. This generous financial support will allow the cellist to accomplish several different musical projects in Switzerland and abroad. www.fondationleenaards.ch

Yes, it's about music.
It's about new music and visual art. There are sounds, colors, things to be discovered. And those things can be shared. In a market driven by permanent mutation, you can become a "music producer" by helping us construct this project. www.cantique.ch

This summer, Estelle will be among the happy players selected for the CelloAcademy. A dream has become reality : to play and progress among the stars!
Highlights of her stay :
*Interview on radio-television : www.canal9.ch
*Press article : www.nouvelliste.ch
*Journal of the Festival : www.verbierfestival.com
*Winner of the "Rotary Club" Prize

"The Beauty and the Cello"

The press took a great interest in Estelle Revaz concert given at the Gianadda Foundation with the "Orchestre des Jeunes de la Suisse romande" and the Sine Nomine Quartet :

In December 2013, Estelle Revaz will be the cello soloist of Beethoven "Triple Concerto" given in Geneva at the Victoria Hall. Then we'll meet her again at the Gianadda Foundation for Bach and Vivaldi Concertos.
For details, please look on "Calendar".
The poster for Victoria Hall's concert : www.victoriahall.ch

The mad days of "The Schubertiade"

After : Espace 2 has recorded the trio's concert with piano at the "Crochetan Theater". To listen to the concert : www.laschubertiade.ch

"We played under the moon"

We are meeting Estelle Revaz again among the stars of the Festival St Prex Classics. Click here to view the film: www.vimeo.com

In Paris and Switzerland, a series of concerts by Estelle Revaz are eagerly awaited in early 2013. Estelle Revaz will be the soloist in Haydn 's Cello Concerto in C Majeur, Vivaldi's Concerto RV 406 and Pranam IV, the latter by a Swiss composer Jean-Luc Darbellay.

Estelle Revaz will be the guest on the programme Magma presented by Isabelle Carceles on friday, October 26, 2012 at 12:05. The interview will be broadcast by Espace 2, Radio Télévision Suisse. To listen to the interview, please click on: www.rts.ch

Report realized within the framework of the St Prex Classics.
To watch the interview, click here : www.rts.ch

Read the article on :
www.la-tribune-de-geneve.ch

In the spring of 2012, Estelle Revaz received " The Foundation Patino/City of Geneva" Prize which included a stay in Paris in the near future. She will then have the chance to dig deeper into the French repertoire of the turn of the 20th century.

Estelle Revaz will be the guest on the programme Dare-Dare presented by Yves Bron on friday, June 8, 2012 at 12:05. The interview will be broadcast live by Espace 2, Radio Télévision Suisse. To listen to the interview, please click on: www.rts.ch

Next summer Estelle Revaz is again guest player at the St Prex Classics Festival where she will perform Vivaldi's Concerto for 2 cellos with Gauthier Capuçon. As well as inaugurating a new concert hall as revolutionary as it is poetic, the festival has prepared a fascinating programme!

Estelle Revaz will travel to Argentina in April 2012 to participate in several concerts scheduled for Mendoza and Buenos Aires under the auspices of the XXIInd "Festival Internacional Música Clásica por los Caminos del Vino".